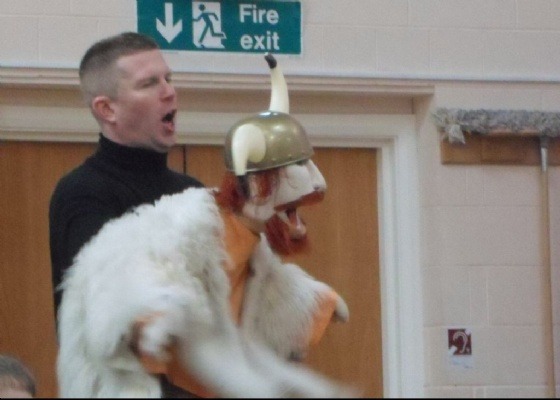 Today Springfield hosted a special themed day- Digging up the Past. As part of this they either learnt about the Romans, Saxons or Vikings during the morning session.  To bring their learning to life, in the afternoon, the Arty-fact theatre company visited to put on a special performance called ‘Let’s Dig It’.

A local museum is under threat of closure, unless the curator can find enough interesting artefacts to keep it open.  Am elderly lady, Mrs Earnest, has to move from her present address on Wall End Lane, as the building company are going to build a new office block.  Whilst the demolition is taking place she finds the objects that seem to be from a different period.  She goes to the museum, and with the help of the curator and the audience soon discovers the value of her items. As the story unfolds, the original owners of the artefacts return and the audience finds out a lot more about the times gone by.